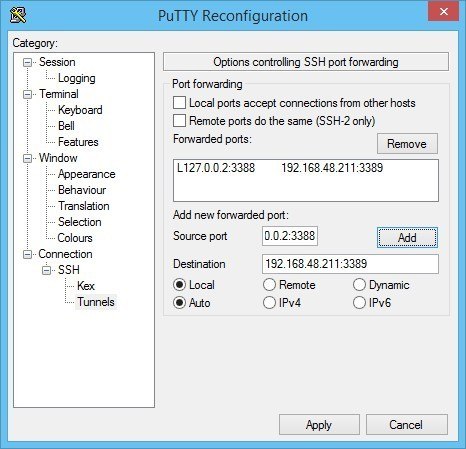 How to tunnel Remote Desktop (RDP) over SSH with PuTTY.

Have you ever been in a situation where you needed to perform remote administration on a Windows Server, and the RDP port 3389 is blocked on a firewall? Did you know you can tunnel RDP over SSH with PuTTY? This particularly comes in handy when there is no VPN available to the remote network… Here is how to set up a RDP SSH tunnel with PuTTY.

SSH can proxy connections both forward and backwards. It creates a secure connection between a local computer and a remote machine through which services can be relayed. Because the connection is encrypted, SSH tunneling is useful for transmitting information that uses an unencrypted protocol, such as IMAP, VNC, or IRC. And RDP :)

SSH can proxy connections both forward and backwards, by opening a port on either the local machine running the SSH client, or the remote SSH server. If you have privileges to do so of course.

For example, if you want to connect to a remote host on RDP port 3389, but you don’t have direct access to reach that machine because of firewall or network restrictions, the SSH client can listen on a local port and pretend that it is the remote machine. All connections to that port will be sent through the SSH server to the remote host.

Learn how to share OpenSSH keys with WSL in Windows 10

To tunnel Remote Desktop Protocol over ssh using PuTTY, all you need is an account on the premises. For example a firewall or Linux server with ssh access, and PuTTY on your Windows desktop. PuTTY is a nifty ssh client for Windows that you can download here.

Once you are connected to your remote network with ssh/PuTTY, you need to reconfigure the connection to support SSH-tunneling. In the PuTTY Reconfiguration screen, go to Connection → SSH → Tunnels. This is where we can set up an SSH tunnel for Remote Desktop.

After clicking Apply, the SSH-tunnel for remote desktop is active, and you can connect the Remote Desktop Connection to 127.0.0.2:3388:

For Windows, PuTTY is the de-facto standard SSH client.

How to tunnel Windows Remote Desktop through ssh on Linux

On a side note, when you are in a situation where you are on a Linux work station and need to tunnel RDP through ssh in Linux, you can use the following ssh port forwarding, or tunnel (assuming you have an on-premise Linux server to SSH into to set up the port forward):

Some Remote Desktop clients for Linux are:

Or do you need to change port forwarding options in an existing ssh connection?

If you have the OpenSSH client installed in Windows 10, then you can use a command similar to Linux’ ssh tunnel:

To ease the usage, I wrapped in a PowerShell script, that connects to my on-premise stepping-stone host with ssh:

use this PowerShell one-liner to verify whether OpenSSH client is installed on your Windows 10 system. It should print Installed.

Another great option is to tunnel ssh using sshuttle, on GNU/Linux. From its manpage:

sshuttle allows you to create a VPN connection from your machine to any remote server that you can connect to via ssh, as long as that server has python 2.3 or higher.
To work, you must have root access on the local machine, but you can have a normal account on the server.

It’s valid to run sshuttle more than once simultaneously on a single client machine, connecting to a different server every time, so you can be on more than one VPN at once.

If run on a router, sshuttle can forward traffic for your entire subnet to the VPN.

If you have an on-premise host / hop / stepping stone, you can use the following sshuttle example:

This’ll easily create a VPN (Virtual Private Network) connection from your machine to any remote server that you can connect to via ssh. Unfortunately you cannot use sshuttle from Windows Subsystem for Linux (WSL) in Windows 10, yet: Command: ” iptable -L ” is not working.

Thank you for your visit! Don't forget to share posts you find interesting with your family, friends and co-workers.